There was a sharp contrast between the old and the new, from the moment Dracula started at the egg theatre last night.

Designer April Dalton’s set, bathed in a light fog, was reminiscent of an ageing relative’s dusty attic. It was lightly peppered with the remnants and corpses of Victoriana and ancient furniture.

Yet while the ensemble buttoned themselves up, Tabby Langridge as Lucy Westerman, was stripping back the confines of restrictive women’s wear, planting one foot firmly into the future.

It was the start of a glorious performance by Langridge, taking Lucy from joyously flighty to dark and edgy depths.

Her light and airy partnership with Lauren Maslen Stevens, as the stoic and motherly sister Mina Westerman, was a brilliant contrast.

For a story in which the patriarchy asserted their authority over the ‘hysterical’ and ‘attention seeking’ women, it was the female characters who remained the stronger.

Ironically, for the disparaging of-the-time mental health attitude towards women, it was Toby Mitchell’s Renfield, that actually blended lunacy with lucidity, tying together the strands of the story.

The role of Count Vlad Dracula, was performed by four actors – Inca Bayley, Chynna Kaur, Edan Saunders and Declan Tonkinson – creating an interesting device where each actor provided a different facet to the Count’s personality.

Their shadowy presence creeping in from both sides of the auditorium made the character omnipresent, threatening and a much harder foe to defeat.

The growing sense of unease and darkness throughout was compounded by Dinah Mullen’s sound design.

The play is the showcase of second year students at Bath Theatre Academy. The incredibly impressive final result was tense, gripping and with high quality acting.

Eleven year old Sid came to the performance last night. He said: “The show was excellent and brilliant. Nothing that I saw had anything wrong with it. I think the timing and the acting was done amazingly. They didn’t put in things to confuse or overwhelm the story.

“I thought the effects with the blood were clever because you couldn’t see how they did it. It looked like it would have done if it was real.

“The strobe lighting made it like a scary horror film, all disjointed and animated. The sound was really creepy too. Made me feel like it was always building up to something bad about to happen.

“I also liked that they made Dracula with four actors playing the part.

“I would recommend it to those who are into vampires and aged 13-14 years upwards.”

To find out more about Bath Theatre Academy: www.bathcollege.ac.uk

For the egg theatre: https://www.theatreroyal.org.uk/your-visit/the-egg/

The Last 5 Years by The Worx Productions Bristol Review 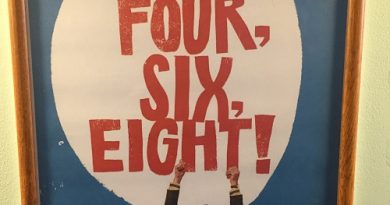 All things #theatre #stagey and #showtunes in #Bristol

Bristol Christmas theatre season in 1988/89. How a

This was excellent. Amadeus By the @nationaltheatr

As a theatre reviewer, there are no photos of me d

It’s really hard to take nice photos of a mirror